The Wine of Corfu

In ancient times, Corfu was considered to be a first-class wine-producing region, even though climate and soil conditions were not particularly favourable to a large output. The coins of the time depicted vineyards, vines, wine-goblets, wine-vessels, and portraits of Bacchus and Silenius. Xenophontas and Homer both praised the wine of the Phaiacians in their works. Venetian documents of the 16th century refer to the wine tax as the most important source of revenue. A century later, however, the Venetians began the limitation of the island’s wine-producing resources, making the cultivation of olives compulsory. With the passage of time the number of vineyards fell continuously, bringing us to the present figure of 7% of all agricultural activity on the island. In spite of this, the Corfiots drink a lot of wine, usually made by themselves. The best wine, in theory, comes from hillsides with a dry soil, such as the region around Pagoi, Liapades, Sinarades, Pentati; and of equal importance with the soil is the knowledge and the experience of the producer.

Kakotrigis: the name derives from the tough stems of the grape clusters, which make gathering difficult. This variety produces a white wine, with a light, enduring bouquet. It is made into wine all over Corfu, without the usual blending.

Moschato: cultivated with particular success in the region of Strinilas on Pantocrator. It yields a particularly fragrant white wine.

Skopelitiko: “High on the nightingale hills, planted vine by vine, the grape is red, blood-like the wine”. Thus it is described in a local song from the village of Ano Garouna, where this variety of grape prevails.

Fraoula (Strawberry): a table grape which, even though it does not belong to the usual wine-producing varieties, is in fact used to make wine in many households. 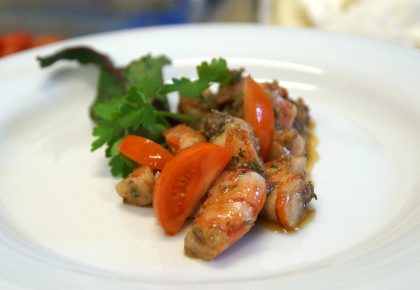